Terminator is an advanced terminal emulator, which is a great proposition for people who often work in many terminals and do not use tiling window managers such as i3wm, awesome or dwm. 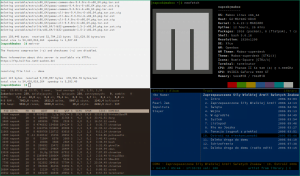 CTRL + SHIFT + arrows – change the size of the terminal

Mabox have also a little wrapper around terminator, which works like drop-down quake-like terminal.
Keybind for it is CTRL + Grave (tilde).
By default its size is 75% width and 50% height, but you can change and save its size and position.

Next time you start quake-like terminal it will have new size and position.
You can reset settings to default by command:
 

Take a look at new, improved and more complete

If you like Mabox and want to help keep it rolling...